A Penny Saved? Or a Moment Wasted?

It's been a while since I felt like writing anything.

The other night, though, my mind drifted back to 5 years ago. 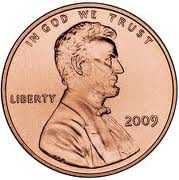 My son Morgan and I had gone to store.  Upon leaving and getting into the car, I noticed a penny on the ground.  I showed Morgan and told him to pick it up.  He declined.  I told him the old adage, a penny saved is a penny earned.  He shot back, a penny picked up is a moment wasted!  Whoa! What a come back!  That statement from that 18 year old really made me stop to think   Was it a moment wasted or was it earned to bend over to pick up a penny off the ground?

Recently, Morgan came to visit.  He asked me if I remembered him telling me that.  I said I did.  Well, he reversed his position!  The penny is worth nearly 3 cents, he told me.  I guess the copper, or what little copper in the penny is more valuable than the penny itself. I Googled the cost to make a penny and came across this site http://news.coinupdate.com/cost-to-make-penny-and-nickel-rises-1139/.

The days of the penny may be numbered!

Maybe Morgan will now pick up a penny off the ground.  I, on the other hand, will continue to deliberate if it is indeed a penny earned or a moment wasted?