Twenty years ago my husband moved his wood shop to where we  live now.  He had signed the lease on the shop building, and had brought us up to see his new work space.  It was January 1, 1992.  My youngest was 6 weeks old.  It was a warm beautiful winter's day.  We loaded all into the family's wagon and headed north.  As we were driving the back roads we noticed there was a wildlife refuge.  We decided to tour it.  What an incredibly beautiful place.  Mind you this was 20 years ago. 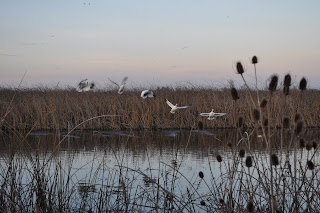 This refuge happened to be on the Pacific Flyway for migratory birds. There were thousands upon thousands of them. This refuge has provided a winter haven for ducks, geese, and swans. Waterfowl migrate here by the millions from as far away as the Arctic regions of Alaska, Canada, and Siberia. 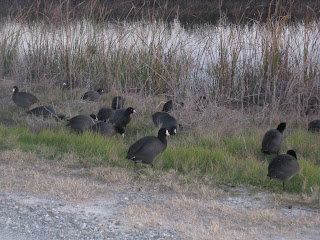 We were awed at God's creative works!
This year, January 1, 2012, was a warm beautiful winter's day.  I awoke thinking this was an anniversary of sorts.  My mind drifted to the wildlife refuge.  So we went.  My oldest daughter and her husband, my youngest daughter, and I drove the 6 mile trail.  My, a lot has changed in 20 years.  There weren't as many water fowl and fewer varieties of birds.  California Department of Fish & Game have found overall duck numbers have declined.  I can attest to that!  But one had to think - what's happened to the birds?   Man's way of doing things has certainly impacted us all - even the birds. 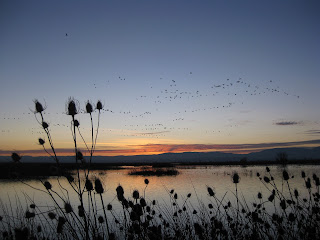 Still it was an incredibly beautiful place to visit.  If you happen to pass by a wildlife refuge, stop in, you won't be disappointed.
Posted by Karita Lou at 12:45 PM No comments: